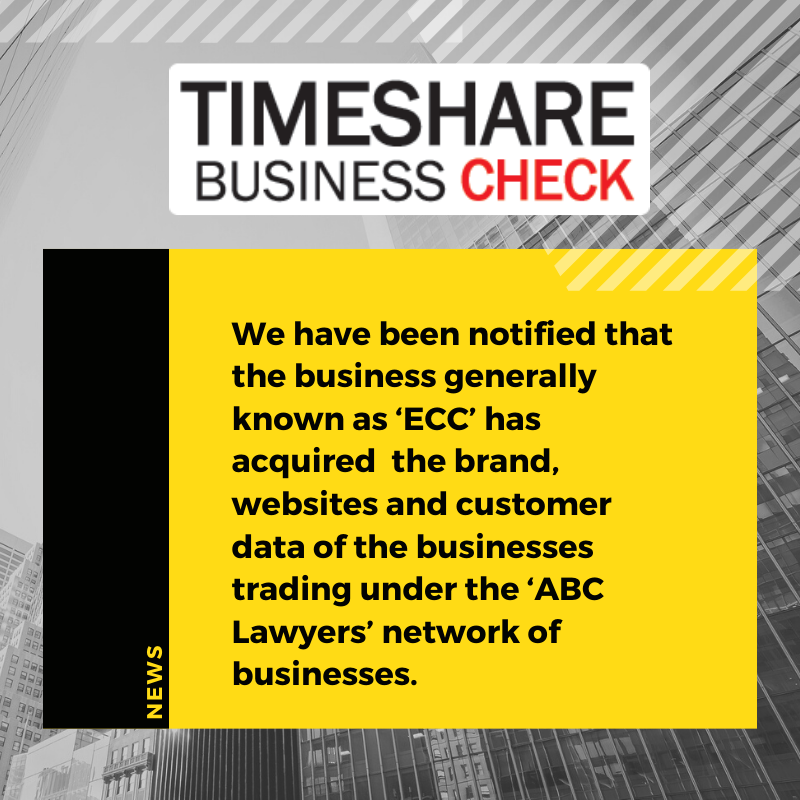 We have been notified that the business generally known as ‘ECC’ has acquired  the brand, websites and customer data of the businesses trading under the ‘ABC Lawyers’ network of businesses. These include the following

They also include the purported consumer advice website called the Timeshare Consumer Association.

The ABC Lawyers network was previously under the control of a Mark Rowe, who was arrested along with several of those that work for him on 28 November 2017 as a result of police investigations into businesses Rowe also owned at that time, including Monster Travel and SellMyTimeshare.tv. Raids were carried out on the various offices of these businesses in the UK and Spain and equipment and documents seized. Rowe and others involved are currently on police bail whilst investigations continue.  Rowe subsequently closed a number of businesses and opened and closed others, including some under the ABC Lawyers / Legal branding.

The business that has stated it has taken over the ABC lawyers operations is ECC – European Consumer Claims, which operates several entities under the ECC brand in the UK, Spain and one that is registered in the USA.

The ECC company that is at the forefront is a UK registered business – European Consumer Claims Ltd.  The sole director of this business is Andrew Charles Cooper.

Cooper had previously been a director of two businesses – Club Class Concierge Ltd, (Company number 05932332) and Bridge View Consultants Ltd., (Company number 06971280) that were amongst seven that were closed down on the orders of the UK government to protect consumers against unlawful activities that included luring timeshare owners to presentations with promises of timeshare contract termination and potential compensation – and then pressure-selling them bogus holiday and ‘lifestyle’ products. Also named as  involved in these activities was a business known as ‘ITRA’ – International Timeshare Refund Action, which promised timeshare relinquishment services. Andrew Cooper played a key role in the operation of ITRA too – and this business was also shut down by a winding up order in the UK High Court after failing to refund monies to consumers as ordered by the courts when it failed to provide the promised timeshare relinquishment services consumers had paid several thousand pounds for.

Also involved in the ECC network are

European Consumer Claims LLC. This business is inserted into ECC consumer contracts and is registered in Washington state, USA. It hides actual ownership (the identity of the individuals that own shares) and claimed to have an office in Gibraltar – which the Gibraltar government Office of Fair Trading (OFT) has stated is untrue. Consumers that have entered into legal disputes with ECC have experienced severe problems in bringing their claims as the UK company owned by Andrew Cooper that collects the fees for ECC denies any liability and says that it is the US business that are responsible. And legal representatives for the US business say that any claims filed against it must be served in the USA.

European Consumer Claims SL, registered in Spain. This company (via a common director and connected Spanish companies) is also closely linked to the Club Class and ITRA businesses that have been closed down by court actions brought by the UK government and consumers.