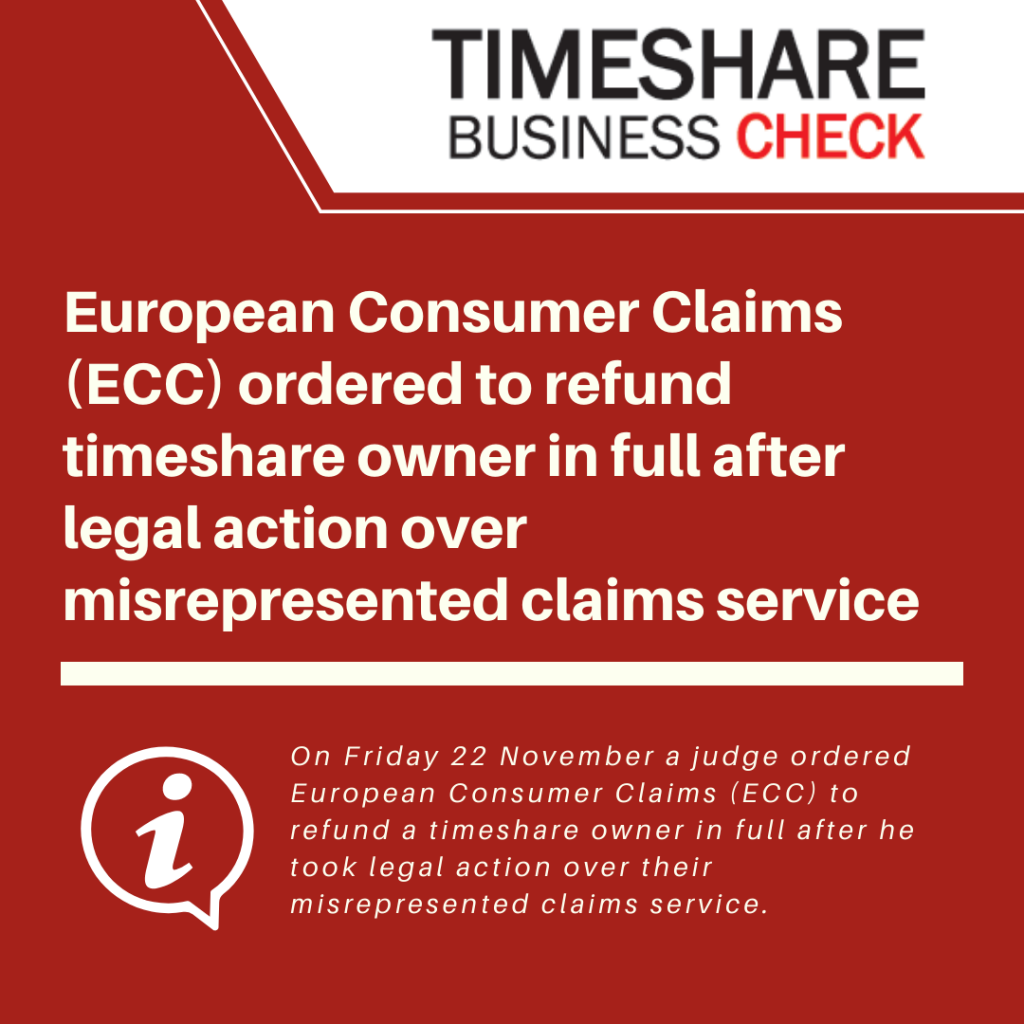 On Friday 22 November a judge ordered European Consumer Claims (ECC) to refund a timeshare owner in full after he took legal action over their misrepresented claims service.

While seeking guidance on exiting his timeshare in Portugal, Mr. G was offered advice by the ‘Timeshare Advice Centre’. Their advisor directed him to another business, at the time known as the European Claims Centre (ECC). In 2017, he attended a meeting with their representative at Churchill House in Langley, Slough, where he was encouraged by news that a large compensation claim would be possible. The ECC representative provided him with a document that outlined his potential claim of £11,802. There was one small problem with this document – it contained information about a claim in the Spanish Supreme Court, but Mr. G’s timeshare was in Portugal.

When he queried this with the representative, he was told that this would apply across the EU – which was a gross misrepresentation of the situation.

With this information in mind, Mr. G paid nearly £3,000 on the basis that he would be getting back nearly £12,000 in compensation.

Having chased ECC numerous times for an update, Mr. G was eventually informed that his case had been handed to M1 Legal, a Spanish law firm. After a period, they contacted him with news that they had terminated his timeshare contract and the case was resolved. At this time there was no mention of any forthcoming compensation.

Upon checking with his timeshare company, they informed him that his contract had not been terminated.

With no further contact from M1 Legal about the £12,000 compensation claim and with his timeshare contract still in force, he started investigating ECC.

Links between ECC and ‘ITRA’

The offices at Churchill House in Langley, Slough, where the original meeting took place have been used by another business – ITRA. ITRA is part of the infamous ‘Club Class’ network of scam businesses that was shut down by UK authorities in 2012 after scamming thousands of timeshare owners with false promises of timeshare exits, claims and exclusive holiday and lifestyle deals.

What’s also known is that the people who are involved in ECC are the same people that controlled ITRA. When ITRA was wound up in the UK High Court in 2019, they had already taken steps to switch to the newer ECC brand.

Mr. G was to encounter further problems when he filed a claim against the business he had paid – European Claims Centre Ltd., a UK registered business.

This business claimed that they had only acted as a ‘payment agent’ and thus weren’t responsible, that the contract itself listed European Claims Centre LLC, registered in the state of Washington, USA, and that any claim should be directed towards them.

Mr. G argued in court that there was no indication that they were providing the services he had paid for, but the judge informed him that he had sued the wrong company.

He sought information on European Claims Centre LLC but results were limited because the names of the people behind that company were hidden.

Then he started proceedings against the US company and M1 Legal, where it was discovered that they had previously been called ‘European Claims Chambers’ and used the ‘ECC’ brand.

Mr. G finally contacted KwikChex for advice and they assisted in arranging for him to be represented by a UK lawyer.

On Friday 22 November, more than 3 and a half years after he had originally paid for their services, a judge ordered that ECC refund him in full.

Click here to find out more about M1 Legal