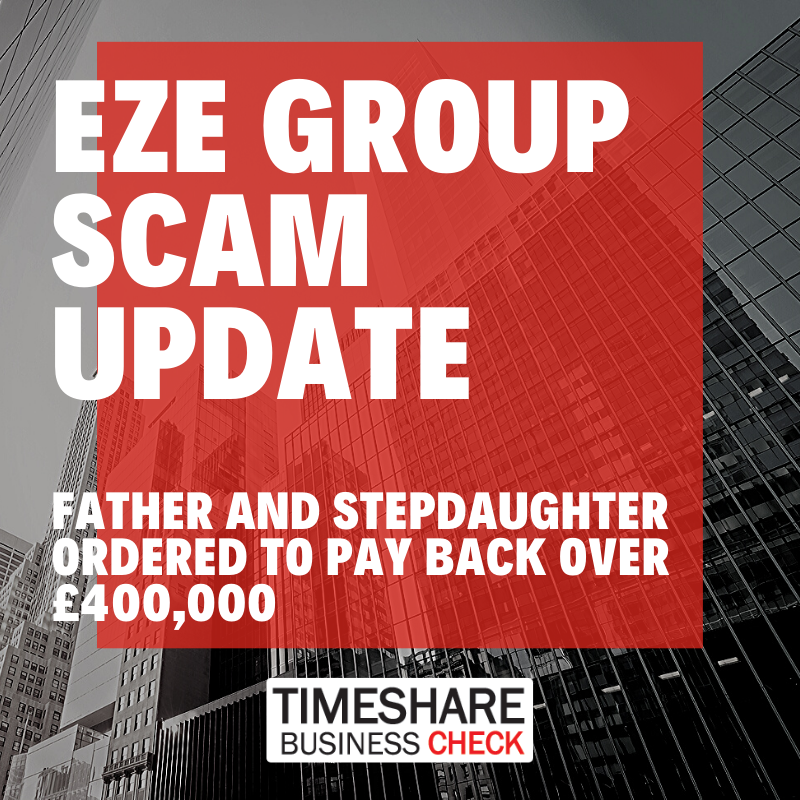 FATHER AND STEPDAUGHTER ORDERED TO PAY BACK OVER £400,000

The confiscation orders follow custodial sentences handed down at Birmingham Crown Court in March 2019. Dominic O’Reilly was sentenced to a total of 28 months in prison and Stephanie O’Reilly had received a sentence of 18 months’ imprisonment, suspended for two years.

The pair had previously pleaded guilty to offences under the Consumer Protection from Unfair Trading Regulations 2008 for their roles in aggressive mis-selling. Between 2014 and 2017, the father and stepdaughter managed ‘Eze Group’, which oversaw various interconnected businesses, including:

These businesses were deliberately set up to appear independent from one another. In practice, they were part of a bigger operation to coerce individuals to attend a presentation run by Eze Europe Ltd.

Eze Group businesses would invite consumers, typically existing timeshare owners, on a free ‘mini break’, which included a presentation given by Eze staff. Some presentations lasted up to eight hours and attendees were subjected to aggressive and highly manipulative sales tactics to encourage them to sign up for services they did not want or need, including services to dispose of timeshares and a ‘club membership’ offering discounts that didn’t really exist.

The presentations made false claims that victims’ existing timeshares would last in perpetuity and that huge debts would be passed onto their children unless consumers signed up to Eze timeshare disposal services. Many consumers reported that they felt trapped at the venue and therefore signed up to Eze services because they felt that it was the only way to be able to leave and return to their hotel.

Consumers believed that they could simply cancel the agreement afterwards, but the company tried to avoid offering customers cancellation rights. This was despite ongoing warnings by Trading Standards from late 2014 that cancellation rights applied.

Enforcement action was taken in April 2016 by the National Trading Standards Regional Investigations Team in Central England, supported by officers from Warwickshire Trading Standards. Complaints continued to be received from consumers about the sales practices being used until 2018, by which time the group was only operating in Spain.

The pair had previously pleaded guilty to offences under the Consumer Protection from Unfair Trading Regulations 2008 and had been sentenced in March 2019 for their roles in the mis-selling being done under the banner of the Eze Group.

Further information and assistance from KwikChex –

We are aware of many attempts by rogue businesses to defraud consumers by falsely claiming they can obtain refunds for EZE Group victims. To clarify – aside from a Section 75 claim for payments made via credit card (which you can carry out free of charge independently), there are no viable court actions regarding EZE Group. Due to this we would advise extreme caution toward any company offering their services to you in this regard and advise NOT to pay any monies or enter into any agreements. Please contact us if you are approached in this way.

For assistance with all enquiries and concerns, please contact us https://timesharebusinesscheck.org/free-assistance

Assistance is entirely free and the service is Trading Standards vetted and approved.