Over 200 timeshare claims and exit businesses have become insolvent or just disappeared, resulting in huge losses and distress for timeshare owners 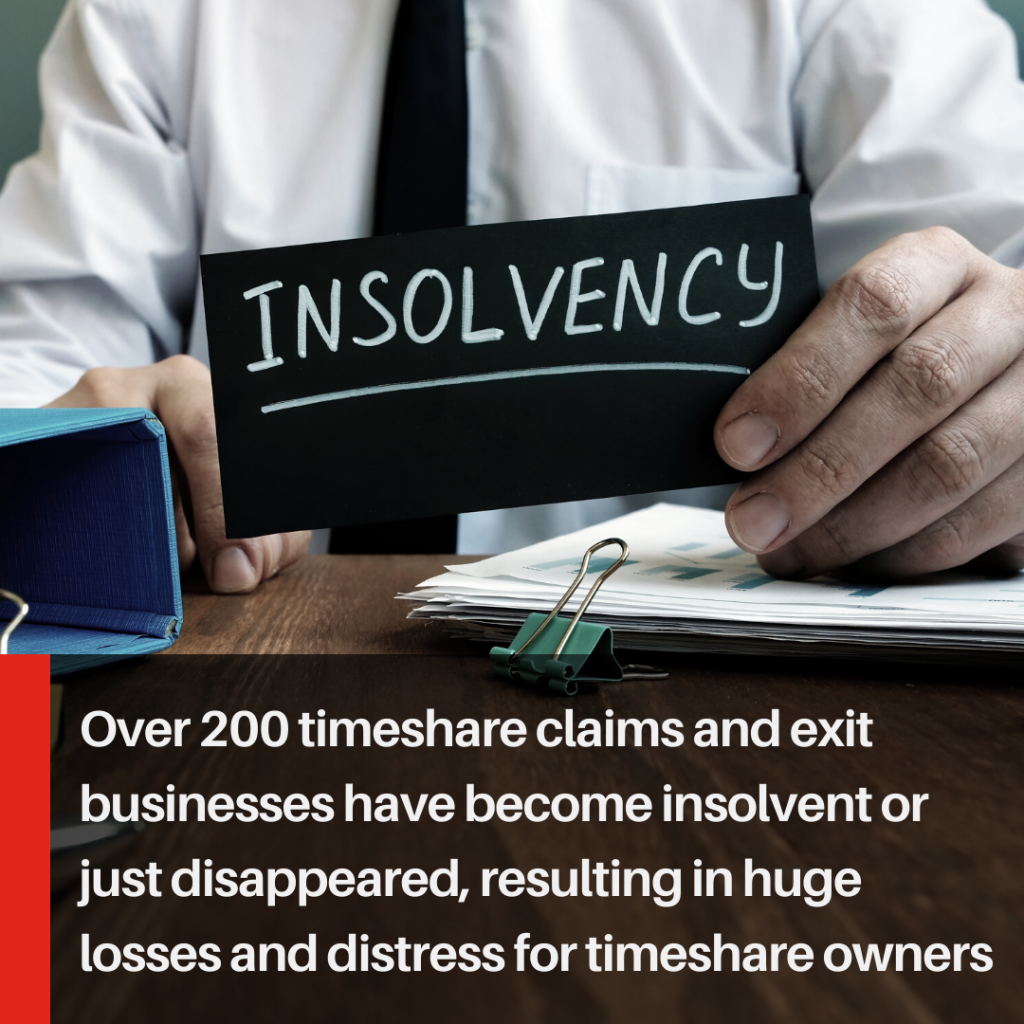 Timeshare owners that have paid thousands for purported claims and exit services are increasingly reporting that the businesses they paid are not responding to calls and emails. ‘Meridian Litigation Advisors’, based in Tenerife is one of the latest timeshare claims businesses to apparently suddenly cease trading. In this case, owners have reported being cold-called and then harassed into believing they were still liable for timeshare fees, even though they had relinquished their timeshares free of charge some years before. Meridian Litigation Advisors passed consumers to Claims Solution Group in Scotland, who then passed them on to Fullbrook Associates, also based in Scotland. Both these businesses say they are no longer taking referrals from Meridian. The Facebook page for Meridian Litigation Advisors has not had any activity since November 2020, apart from a review which states

“I paid over £6k back in 2020 and have had no contact with MLA since. I spoke to the company in Aberfeldy they were ” involved with ” and was told they no longer worked with Meridian LA.I have tried e. mailing with no success. I was told that I had a great case for compensation for mis sold time share, but I suspect I’ll never see a penny. Be warned !”

Other ‘claims’ businesses that previously passed consumers on to Claims Solution Group and Fullbrook Associates have also ceased trading in similar circumstances, including Standon Mortimer, Centaurus Mediations and Capital Reliance.

The notorious EZE Group also offered exit and claims services, prior to the arrest and subsequent criminal convictions of owners Dominic and Stephanie O’Reilly.

ITRA – a part of the huge Club Class scam and previously a sister business of current company European Consumer Claims, was wound up in the UK High Court after failing to refund monies for services they did not provide.

These problems occur in many countries. In the US, a business named Timeshare Termination Team that advertised extensively on television and online and which previously had lots of 5-star, glowing reviews, has suddenly closed without warning. Many of their customers are now complaining about the monies they have lost.

Over 200 claims & exit businesses have disappeared

Research by KwikChex has identified over 200 of these businesses that have closed down – a mix of registered businesses and bogus websites. Most have been cold-callers that have used personal data unlawfully and persuaded timeshare owners to part with huge sums by using a mix of deceptions and scare tactics.

Timeshare owners are protected by a number of laws and there are also many timeshare companies offering exit options directly. If owners believe they may have a case for compensation because of possible mis-selling, in order to avoid scams and losses, it is essential they take the greatest care and make very thorough checks on businesses offering timeshare exit & claims services.

To assist owners in carrying out checks, we have published an advice article, which includes links to official sources of advice, including a recent update from UK Action Fraud – https://timesharebusinesscheck.org/advice-on-timeshare-legal-advice/