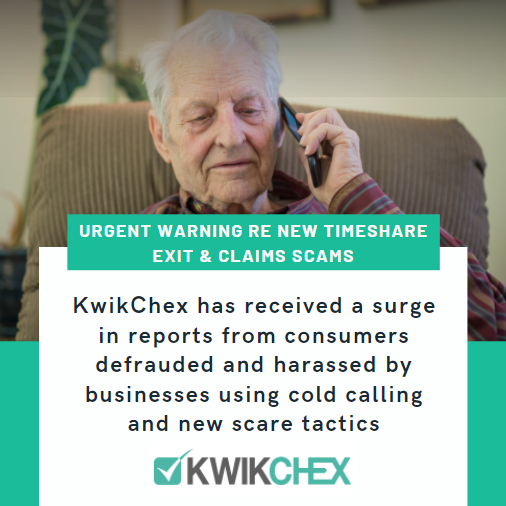 KwikChex has received a surge in reports from consumers defrauded and harassed by businesses using cold calling and new scare tactics – including telling people who have previously relinquished their timeshares that they will be chased for thousands in backdated fees.

The ‘not legally terminated’ scam

An apparent network of businesses has been calling ex-timeshare owners and falsely telling them they have checked ‘official lists’ and found that they are still liable for fees as their contracts have not been ‘legally terminated’.   Even when the consumers have provided documents from the timeshare companies that confirmed relinquishment, they state that these have no validity and intimidate the consumers into paying huge fees. This is fraud – the written confirmations of relinquishment that have been provided are binding, even if the timeshare company is taken over.

The ‘you can’t relinquish directly’ scam

When consumers are still owners, the scare tactics are that the timeshare businesses will never allow relinquishment, and that without the ‘legal assistance’ of the caller, they will have to pay fees for the rest of their lives – and their children will also inherit the fees. This is fraud – many timeshare businesses provide exit options, including free relinquishment for owners that have suffered poor health, bereavement, or serious financial difficulties.

The ‘you have to act immediately because of Brexit’ scam

British owners with timeshares in Europe are being told that they only have days if they ever wish to relinquish their timeshares – and potentially make a compensation claim due to the UK’s withdrawal from the EU. This is fraud – no changes have taken place since the UK left the EU. The laws remain the same, and any genuine claim could still be pursued.

The businesses perpetrating these scams are in breach of data protection laws. They should not be making contact at all and are using stolen data to do so. They are not the ‘legal experts’ they claim to be and consumers are urged to file reports with the authorities of fraud and data protection breaches.

Several of them state they are using lawyers and solicitors – but if that is the case, then serious problems would occur because of the data protection breaches, the deceits and the lack of qualification to make any initial assessment regarding legal matters. One UK regulated Claims Management Company (CMC) is involved – and these matters are being referred to the Financial Conduct Authority (FCA).

Businesses that have been carrying out or are involved in the unlawful behaviour described are operating predominantly from Spain, with the participation of some UK based businesses and persons. Statements are currently being taken from affected consumers and the authorities have been notified in the UK and Spain. More information will follow soon.

Consumers are urged to do all possible to protect themselves against these scams. If you have been approached or paid monies in these types of circumstances, you can report and seek free assistance via the following:

KwikChex liaises and cooperates with the above and the police and consumer protection authorities in the UK and internationally. If you require free assistance with making complaints or seeking refunds, you can do this on this website, via the Trading Standards Approved Timeshare Task Force/Timeshare Business Check.